I used these articles when I wrote this post. It may be helpful for you as well:

AWS Batch acts as a simple queuing system where the user can submit a task that can be ran on containers. We will have to create a compute environment on AWS Batch first. I created a managed compute environment, named gpu using AWS Batch Dashboard. I selected provision model as spot and allowed instances as p2 and p3. I set Maximum % on-demand price as 100%, which means, my instance will be terminated when the price of spot instance goes over 100% of the on-demand instance price.

Next, create a job queue called gpu and make it use the gpu compute environment we just created.

Next, we prepare a Docker image for MD simulation. This Docker image will be used in a task. For a test, let’s prepare a very simple Dockerfile and use it for AWS Batch.

I built the image and uploaded to Docker hub as sunhwan/openmm.

Next, let’s create a job definition from the AWS Batch Dashboard. I selected platform as EC2, image as sunhwan/openmm, and selected the number of GPUs as 1.

Command parameter in the job definition is what gets executed after initialize the Docker image. Because this is a test, let’s use python -m simtk.testInstallation for the command.

This is straightforward using the AWS Batch Dashboard. Select Submit New Job menu from the dashboard and select the job queue and the job definition we just created. It should populate default option for you. Select Submit at the bottom of the page, and Voilà, the job is submitted. Wait a few seconds (or minutes) and you should be able to see the job is being processed and finished running.

To check the output, you will have to check the log stream in the jobs detail page. Below is from my test.

Let’s try a more general example. Let’s create a job definition that can take script (and input structure) from AWS S3, run MD simulation, and store the output back on the S3 storage. 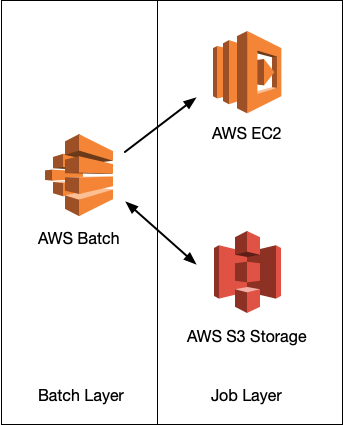 To achieve this, we need to prepare several settings:

That’s a lot of boilerplate! All is left is to revise the job definition file to submit a job. Note that we need to supply the IAM role for S3 access and the environment variables for fetch_and_run.sh script. The job script should 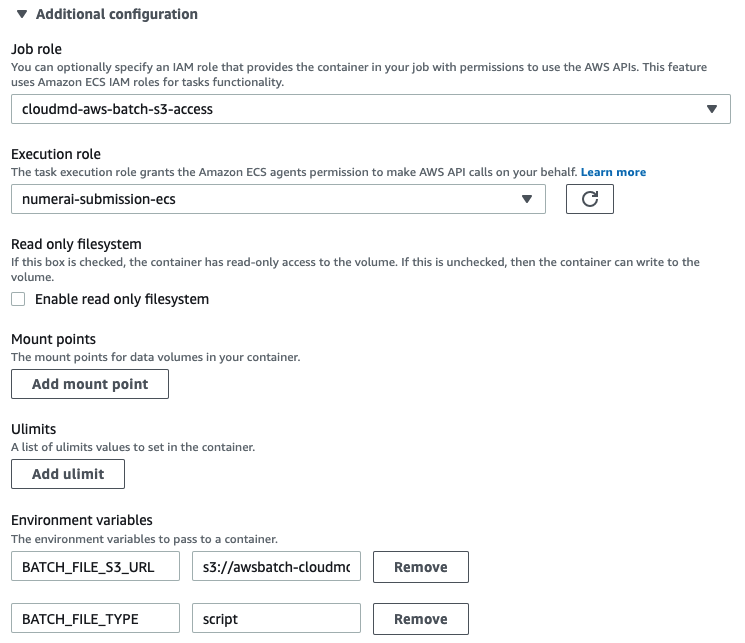 A job submitted with this definition will sit in a job queue for a while (it took me more time because I selected spot pricing and it appears the price at the moment was higher than what I asked) then started running and finished in about an hour after running the simulation.

My job script does not handles restarting in container properly. To handle this properly, the checkpoint file has to be written on S3 to make it persistent and examine if there’s any restart file in S3 storage when a new job started.

In the last post, I used AWS parallel-cluster to build a cluster quickly and ran MD simulation on GPU instance. This is great for users quickly test system setup and run MD simulation all at the same time.

This time, I looked at how I can set up MD simulation using Docker container and AWS Batch as a scheduler. Using container is great because my simulation will always run at a controlled environment. In addition, we now don’t have to maintain the master node because container image can be tested/deployed from a laptop.

Using AWS Batch and container does require more setup up front, however, if the tasks are well-defined and if the tasks do not change often, then it is a great way to simplify task setup and management. As an added benefit, all job definition/task submission can be done from a command line (using AWS CLI) or can be done progamatically using AWS API. It is probably very useful to set up some kind of high-throughput workflow that use MD simulation (e.g., docking -> run MM/GBSA or some adaptive MD simulation algorithm) when it is coupled with workflow scripts such as AWS Step Function.

One aspect that I find it challenging is how to bring files in and out of the container. I used S3 in this example, but I found this more cumbersome. Probably there are more convenient file storage options available for AWS container tasks.